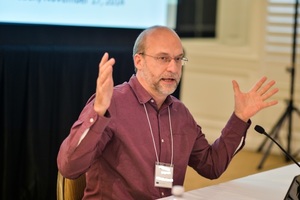 Christian Smith is the William R. Kenan, Jr. Professor of Sociology and Director of the Center for the Study of Religion and Society at the University of Notre Dame. Smith is well known for his research focused on religion, adolescents and emerging adults, and social theory. Smith received his MA and PhD from Harvard University in 1990 and his BA from Gordon College in 1983. He was a Professor of Sociology at the University of North Carolina at Chapel Hill for 12 years before his move to Notre Dame.

Smith is a leading American theorist of the philosophy of critical realism and the social theory of personalism. His larger theoretical agenda has been to move personhood, morality, motivated action, culture, and identity to the center of sociological theorizing generally and the sociology of religion specifically. Smith's critical realist personalism require social science to revise its dominant approaches to causation, social ontology, and explanation. Recent personalist works by Smith include What is a Person? and To Flourish or Destruct. Earlier in his career, Smith's work on social movements emphasized not only structural political opportunities but also personal moral motivations for participation in social movement activism. In his work on American Evangelicals, Smith developed a subcultural identity theory of religious persistence and strength in the modern world and highlighted the massive cultural complexities within conservative Protestantism. His book, The Secular Revolution, emphasized the centrality of culture, agency, and moral vision by religiously hostile actors in the secularization of American public life. Moral, Believing Animals' anthropology underscored the morally-oriented, narratological, and epistemically anti-foundationalist condition of human personhood. Smith's more recent work on the religious and spiritual lives of U.S. adolescents--in his books, Soul Searching, Souls in Transition, Youth Catholic America, and Lost in Transition--emphasizes the interplay of broad cultural influences, family socialization, and religious motivations in forming the spiritual and life experiences and outcomes of American youth.